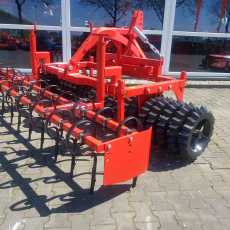 Danish vegetable machinery manufacturer Asa-Lift will retain its logo, but the colour of the machines is being changed from blue to red.

The next important step to incorporate the corporate design of the brand to the Grimme Group, Asa-Lift machinery with the new colour and adapted logo are on display for the first time at the Grimme Technica event in Damme, Germany, which starts today.

Founded in 1936 and based at Sorö, about 80km southwest of Copenhagen, Grimme acquired the majority stake of the Danish company Asa-Lift in 2013. The cooperation at both technical and sales level has intensified during the past five years, and Asa-Lift machines are now built using components from Grimme subsidiaries Internorm (plastics technology) and Ricon (webs and conveyors).

In addition to the long-standing Asa-Lift dealers, all Grimme sales and service companies, as well as selected premium partners, are now also involved in the sale of Asa-Lift products. To increase manufacturing capacity, a new 2,200m² building was opened in April this year and new sheet metal and tube lasers were installed. Since the takeover, staff levels at Asa-Lift have increased by a third to 130.

“With Asa-Lift, we have succeeded in integrating a premium brand in vegetable harvesting technology into the Grimme group,” said Franz Grimme. “We will continue to intensively expand this very special segment so that we can meet the increasing and high individual demands of our customers in the best possible way with innovative solutions.”